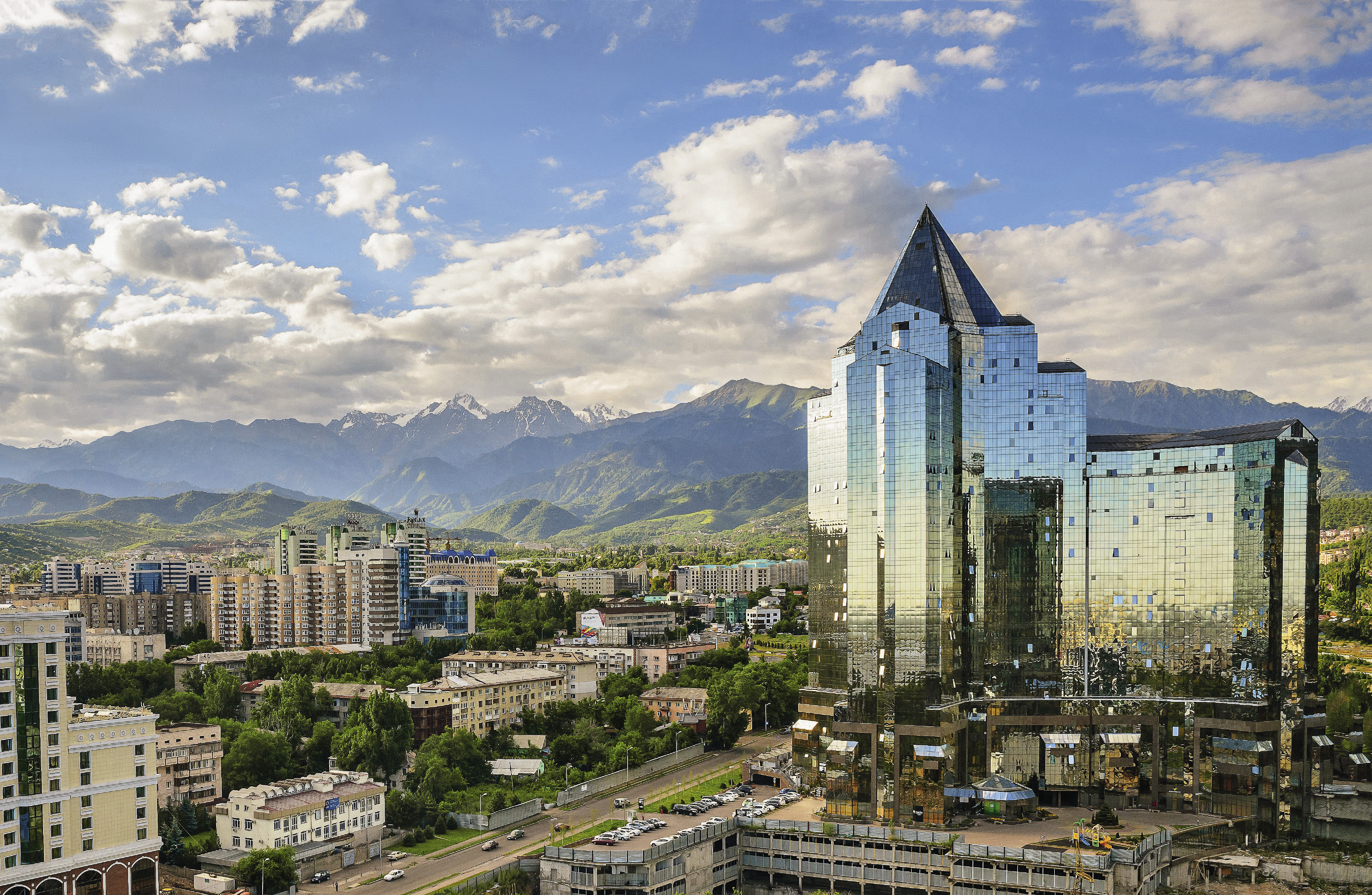 Almaty is the largest metropolis of the country, even after the loss of the capital status, the city remains a small state within the state. It is a cultural scientific, financial, commercial, transport and tourist center of Kazakhstan.

It is the most beautiful city at the foot of the emerald ridges of the Tien Shan and not accidentally called “the garden city”. When the southern outskirts are buried in the flowering of apple, apricot, cherry gardens in spring, the city becomes like a fairy tale. Luxurious green outfit, majestic panorama of the mountains makes Almaty unlike other cities. Gardens, groves, parks, boulevards, and flower gardens occupy over 8000 hectares of urban area.

The name Almaty comes from the word “alma” that is translated as an apple. The famous pearmain “Aport” has found its native land in Almaty. Some sources say that in ancient times there was the famous caravan road – the Silk Road – the trade settlement of Almaty. In the thirteenth century it was destroyed by the horde of Genghis Khan. And, near the ruins of the ancient city, the city of Verny appeared in 1854. In the years of Soviet power, the fortress was renamed to Almaty City and become the capital of Kazakhstan from 1929 to 1997.

Almaty residents live at an altitude of 550 to 1950 meters above sea level. This is one of the few cities on the planet that have modern high-rise buildings, despite seismicity and highlands.

Almaty is located in the center of the Eurasian continent, in the South-East of the country. At 77 degrees of East longitude and 43 degrees of North latitude. Climate is from continental to subcontinental. The South and the North of the city are located in different climatic zones.

Almaty is a huge abundance for backpackers. There are few places in the world that could offer such simple access from the city center to the mountains. In the vicinity of the Trans-Ili Alatau there are tourist routes for all levels of skill and interests. There are more than 50 of them.

Routes are divided into two categories: one-day tours, light trekking or climbing to a high altitude with an overnight stay, which requires technical knowledge and climbing equipment. Nothing can compare with the sensation when you reach a difficult peak and see below rocks and mountains only from all sides. If you are not ready for trekking, then there are many quiet places in Almaty for walks: Bauma Grove, Botanical Garden, Central Park, Kok-Tobe, areas along Malaya and Bolshaya Almatinka, and Vesnovka rivers.

The art of climbing is most often used to climb high peaks. It is recommended for beginners a wall of climbers in a central stadium that has 16 meters in high in an enclosed space – a good place to learn the basics of rock climbing. Another places are the cliffs of Medeo in favorite for the Almaty climbers, where you can practice and begin to climb too (4 km before reaching Medeo). Cliffs of Tamgaly Tas are the series of cliffs along the Ili River, hat takes half an hour from Kapchagai reservoir. The highest is about 80 m, with different difficulties in climbing.