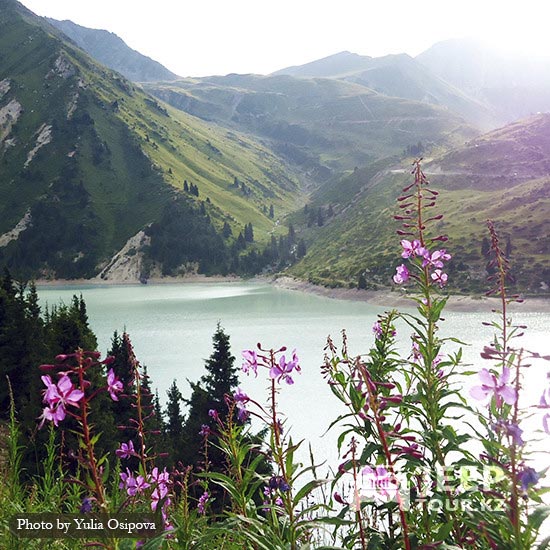 Big Almaty Lake is located in Great Almaty Gorge at an altitude of 2511 meters above sea level and 285 km away from Almaty. It locates within the hollow like a sparkling mirror that is surrounded on all sides by majestic peaks. The overwhelming majority of the mountain lakes of the Tien Shan arose as a result of earthquakes. The Big Almaty Lake is the largest of these lakes. Three main peaks rise above the lake as they can be seen from the northern end of the dam: Soviets Peak 4317 m to the South-East, Ozerny 4110 m to the South up the river valley, and the wooded slopes of Tourist Peak are 3954 m to the South of the Lake. There is the crest of the Great Almaty peak At the West of Tourist peak which looks like a pyramid with a height of 3681 m that becomes clearly visible from the center of the City. Depending on the season the lake changes its color from light green to turquoise-blue. The lake that flows by glacial water extends for 1.6 km in length, almost a kilometer in width and 40 meters in depth.

There is a settlement of an observatory with effective domes called “Tien-Shan Astronomical Observatory” that locates above the blue bowl of the lake in a very ancient glacial valley 2 km away from the lake, at an altitude of 2700 meters. There is also Cosmic Rays Research Station (Cosmostation) even higher at 8 km distance and altitude of 3,300 meters that locates near the Zhasylkezen mountain pass. The left road from the dam leads to the Tourist pass to the valley of the Left Talgar river; the right road crosses the river and rises to the mountain pass Ozerny. You can see a beautiful view of the snow-capped peaks of the Zailiysky Alatau from the Almaty Alagir mountain pass.