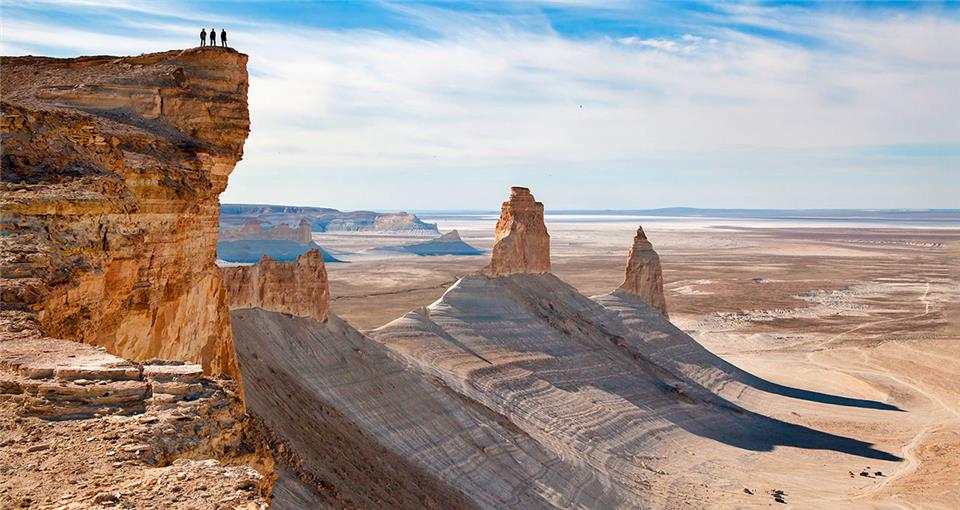 Ustyurt is a plateau in Kazakhstan and Uzbekistan, located between Mangyshlak and Kara-Bogaz-Gulf in the West, and Aral Sea and the Amudarya delta river in the East. Plateau area is a clayey and clayey-gravelly desert with area of about 200 thousand square kilometers. Also, there are the sections of sandy desert.

The plateau of Ustyurt is very often called as the border that separates Asia and Europe. The Ustyurt plateau occupies vast spaces between the Aral and Caspian seas and has a characteristic feature: a cliff with steep and hard-to-reach break with height about 150 m (Eastern Chink facing the Aral Sea that reaches 190 m).

According to scientists the Ustyurt plateau is the bottom of the dried-up sea that existed in these parts in the early and middle Cenozoic era (21 million years ago). This is evidenced by impregnations of shells in limestone, as well as iron-manganese concretions, like billiard balls, scattered throughout the plateau. These “balls” formed at the bottom of the sea and then, as more resistant to weathering, were on the surface when the surrounding limestones and dolomites which were blurred by water. The smooth desert relief is similar to the Martian landscape from a Hollywood film that interrupted by Cretaceous deposits in the form of rocks and appearing here and there with cracks and it seems that you are exploring a different, an unfamiliar planet by an unbelievable chance.

The plateau of Ustyurt is particularly beautiful during sunsets and sunrises. Cretaceous rocks present an impressive picture during sunsets and sunrise when white rocks are painted in crimson colors. Flora and fauna of Ustyurt opens to the eyes of travelers in a day.
Gradually, by getting used to unusual natural conditions it is possible to notice colonies of gerbils, gophers and jerboa. Here lives a large number of birds of prey – vultures and eagles, which are sit proudly on the rocks of the chink. You can also see saigaks, although it’s unlikely that amateur photographers will be able to capture these timid and very fast animals on camera. But travelers can take pictures of Ustyurt arhars in their natural habitat places. The wild horses are present too on the plateau of Ustyurt, what would be most surprising for anyone. There is talk that there were farms of nomadic Kazakhs earlier, but the horses were wild and settled down on a plateau, where they still live.