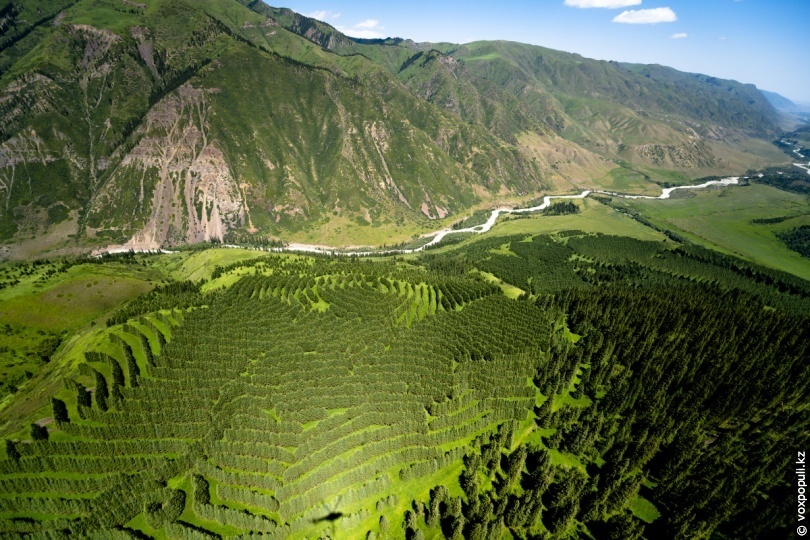 There are most of the tours in the Almaty region around Kazakhstan.

The area from Almaty to Balkhash Lake is historically known as Semirechye or “the country of seven rivers”. It is one of the richest and interesting regions of the country. Ili River flows from China to the West flowing into Balkhash Lake as the largest of the rivers. The remaining 6 rivers and 800 mountain streams flow down from the mountains of the Zailiysky Alatau to the South and from the ridges of the Dzungarian Alatau to the North-East.

Zailiysky Alatau is the most northern ridge of the Tien Shan mountainous country. The first researchers named this area as Zailiyskiy part (that is the part beyond the Ili River). This region has a deeply individual, unique beauty, as a combination of majestic mountains with eternal glaciers, grandiose gorges, forests, alpine meadows and endless steppes. Through the famous “Dzungar Gates” passed the ancient caravan path.
Dzhungar Alatau is a mountain range near the city of Taldykorgan which runs along the Kazakh-Chinese border. These are low-mountainous mountains – up to a height of 4665m with spectacular waterfalls and swift mountain rivers.

The Almaty region is located within the vast Eurasian continent. It extends from North to South from 47° northern latitude and almost up to 42° southern latitude, i.e. about 650 km from West to East – from 74° to 82°, i.e. almost 700 km.

In the East, the region borders with China, in the South – with Kyrgyzstan. The Almaty region occupies the entire southeast of the Republic of Kazakhstan. In the North it borders on the Semipalatinsk region. This border runs through a chain of large lakes: the fresh-salt Balkhash lake; Alakol and Zhalanashkol-salted lakes; Sasykkol and Uyaly are fresh lakes. In the East, the region borders with China across the mountain range of Dzungarsky Alatau. In the South, the region stretches along the mountain ranges of the Zailiysky Alatau with the slopes of Kungei and Terskey Alatau. This is the Northern and Central of Tien Shan massif.

The center of the region is occupied by ridged and hilly sands. The region is cut by Ili River, the largest in the Seven Rivers.

In addition, it is necessary to note that the most significant tributaries are Charyn, Chilik, Turgen, Issyk, Talgar, Big and Malaya Almatinka, Kaskelen, Uzun-Kargaly, Bayankol to the largest river Ili in the East, Kurty in the West.

You can meet virgin, completely deserted places on the North from the Ili River and the Kapchagai Sea, on the territory of the Altyn-Emel National Park: an unprecedented beauty area Aktau (White Mountains) with amazing coloring with ancient bottom sea sediments of the formerly Tekis ocean that was here before.

The most popular point of interest is the Singing Mountain or Singing Barkhan. It makes loud with the movement of sand reminding sometimes the roar of a jet plane sounds, and sometimes the sounds of organ music. There are mounds of the times of the Huns, Saks, Usuns, ancient Turks, Mongols, Dzungars on the shore of Ili river.

There is a remarkable monument of Tibetan Lamaists with rock carvings of Tamgaly-Tas, further to the West along the Ili River (they are about 600 years old). The Tamgaly-Tas massif is located 120 km away from Almaty, on the northern bank of the Ili River and consist of granite rock massif that was cut by labyrinths of narrow gorges, which is used by climbers for training and competitions in the spring-winter period, when avalanche danger persists in the mountains. But the main advantage of the tract is the unique rock carvings: images of five Buddhas painted by Buddhist monks-missionaries in the 14th century.

Still further, there is a rare monument of primitive art – the ancient sanctuary of Tamgaly to the North-West 180 km away from Almaty. This is a complex of archaeological sites, including various settlements, cemeteries, ancient quarries, petroglyphs and cult constructions. The core of the complex is a gorge site – a canyon where five main clusters of rock carvings concentrated.

It is necessary to tell a little about plants and animals that live in these places.

There are arrays of sand, solonchak, takyr with wormwood, solyanka, desert shrubs and thickets of saxaul in the Southern Balkhash region. The steppe blossoms in the spring time and within a month and little over (April – May) becomes a real paradise for all desert living creatures. There are dense thickets of reeds, tugai forests (willow, shrubs) in the delta in the valley of the Ili River on the swampy coast of Balkhash. There are deciduous forests with wild apple, apricot, and shrubs in the foothills and mountain areas. There are the belt of subalpine meadows in combination with coniferous forests (spruce, pine, archa) from the height of 1500 m and above 2,800 m of alpine meadows.

The exotics of Almaty tourism is that a traveler can witness five climatic zones within one day or even several hours, pass from a heated deserts and semi-deserts (600 meters above sea level) to eternal glaciers (4000-5000 meters above sea level). The natural complex of this region contributes by different categories of travel and subject and complexity. It is possible to take from 4 hour excursions around the region to a risky expedition to all points of Kazakhstan and Central Asia. Almaty region has 40% of the country’s tourism potential. The best season for travel lasts from May to October.